Journal
You are here: Home1 / Journal2 / Journey into Healing 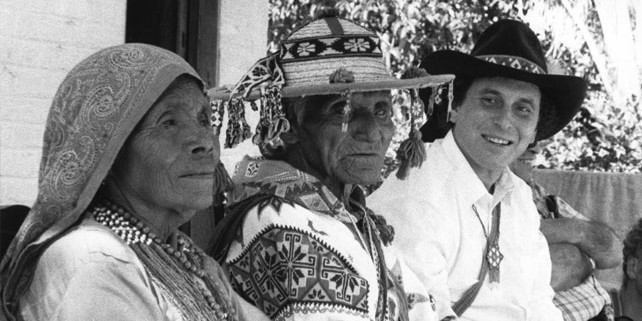 In 1970 at 18 years old, intrigued by a book of Carlos Castenada. I left my hometown in New Jersey and set out on a journey to Ixtlan as a spiritual tourist in search of Don Juan. En route, I met a Huichol schoolteacher, who gave me the name of his family’s village – a five day walk away.

Soon, I found myself hiking through the Sierra Madre Mountains, in search of the mysterious Huichol natives. With the sun blazing down on me, I followed a narrow deer trail hoping I was still heading in the right direction. The Mexican towns, along with the rest of the modern world quickly faded behind me.

The Brazil Trees and the thick underbrush enveloped me, as I continued deeper into the Sierra. After three days and no sign of any village, I found myself hopelessly lost. I had drunk my last sip of water and tried to calm the panic rising inside of me. Pressing on in hope of finding the village, dehydration and sun exposure overtook me. The trees around me began spinning. I collapsed, sinking into unconsciousness, as feelings of disgust, anger and finally fear overtook me.

As I lay dying on the parched earth, I dreamt of circles full of light spinning in front of me. Visions of deer and an old indigenous man appeared. Suddenly, cold water hit my face. Startled into consciousness, my beautiful dreams and visions faded. Slowly opening my eyes, above me loomed the dark faces of three natives. They told me in Spanish of an old shaman in their Huichol village who had dreamt I was dying at this spot and sent them to save me two days earlier.

Still weak, I was led through the mountains to a clearing with mud and stick huts, the smell of tortillas cooking and sounds of children playing. Amazed at this scene and that I was alive; I was taken to their shaman Don Juan (of the same name, but not the one of Castenada fame). I remained there for two weeks. The people told me of another shaman, Don José Matsuwa, in a nearby village who had also dreamt of me: He summoned me to his rancho. The same three natives who had originally saved me led me to his hut.

Shortly after meeting Don José I was put in a cave for five days and five nights with no food or water. I was told this was my initiation. If I lived, I would continue as an apprentice to this renowned shaman and healer.

12 years later I completed my apprenticeship. I had been adopted as Don José’s grandson. He had taught me the ancient wisdom of healing and ceremony and we had become close companions on the path of the shaman. Following my training, I was sent back to the modern world, to help share the secrets of the Huichol, to heal those in need and to conduct ceremonies to bring balance to the Earth.

Since that time I have been traveling the world, striving to fulfill the vision of my teacher. Thousands of people have come to me for healing. From every corner of the globe and from all walks of life. Many of them have tried everything western medicine has to offer before finally resorting to shamanic healing. It seems to me that people today are more in need of healing than ever before.

I was diagnosed with Lyme’s disease, and antibiotics were not helping.
I went to Brant to ask for help.  He did a series of healings for me that
healed the Lyme’s with no residual effects.  Years later when I suffered a
bad fall and tore my MCL, his healings made it possible for me to avoid
surgery.  These are just two of the ways his healings have  helped me over
the years.

Another time, my niece was trying to get pregnant.  I told her not to worry – if she wasn’t pregnant by the following June, I would take her to meet Brant at the Summer Solstice, as I knew he had good luck with women’s issues.  He did a fertility healing for her, and she was pregnant within a month.  Her first baby was born the following April, and she had a second baby 20 months later, blessing me with two beautiful great-nieces.

Shamanic healing searches out the root of illness. Often a person’s ailment stems from something much deeper than what is felt on the surface. This is common with psychological and spiritual trauma, but also with physical ailments. The shaman strives to find the source of the illness and to extract it from the individual.

For many, shamanic healing may seem far-fetched or simply archaic; however, I have witnessed time and again its relevance for those very people who don’t even believe in it. I have had numerous people come to me after trying “everything else” and searching desperately for healing. One such man came to my office in Santa Cruz, California for a healing over 15 years ago. As soon as I met him, he asked if he needed to believe in the shamanic healing I was about to conduct. I said “no” and he replied, “Good, because I don’t.” His doctors had given him two weeks to live with his pancreatic cancer. He ended up in remission and lived another ten years.

I am so grateful for my journey to the Huichol. I am thankful for the countless healings I witnessed while studying with Don José, which allowed me to believe. I remember one of the first things he told me. He said, “Until you learn to believe, you will never really learn.”

You can be told the earth is sacred or that shamans can dream of the future or heal terrible diseases, but until you experience it yourself, you can never fully believe. Experience is one of our greatest teachers.

SHAMANISM: The Healing Journey of the Heart